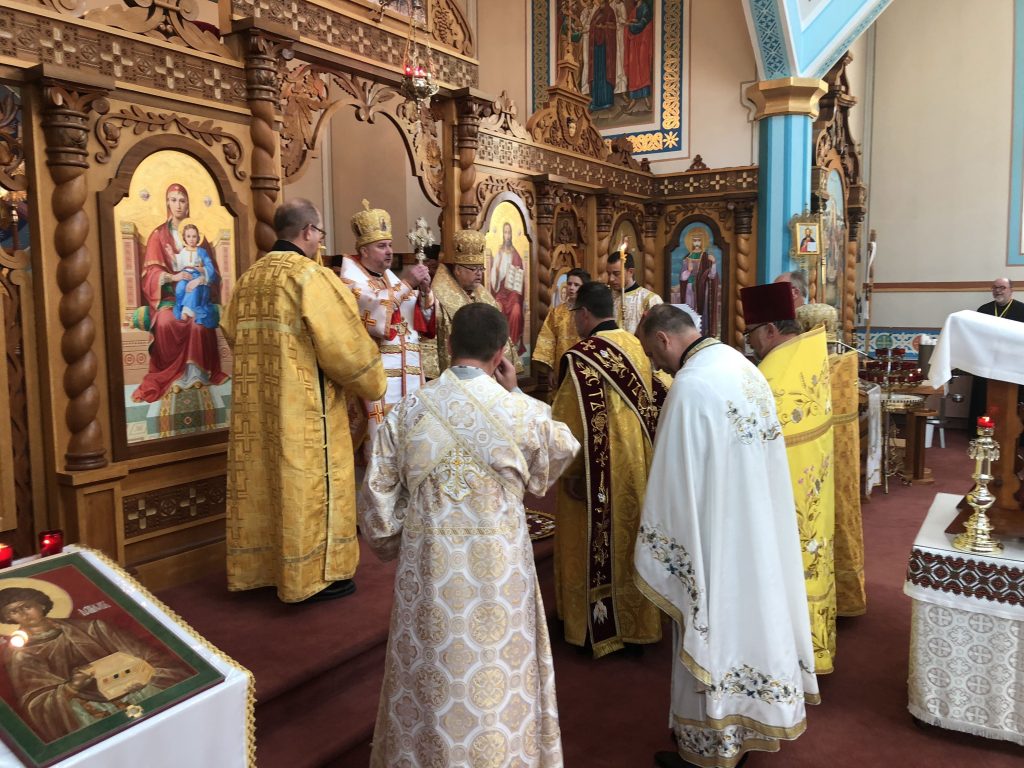 I recently heard a lecture by Dr. Paul Maier, a biblical scholar and professor of ancient history at Western Michigan University. Dr. Maier, a Christian, explores such extra-biblical disciplines of archaeology, geography and history to corroborate the events, people and locations in order to authenticate and confirm the biblical record. Based on Dr. Maier’s information and the Scriptures this article attempts to answer the question.

How could people singing “Hosanna to the Son of David” on Palm Sunday
scream “Crucify Him ! Crucify Him !” on Good Friday ?

The day after Jesus raised Lazarus from the dead, He made His “triumphant” entry into Jerusalem, where He was greeted by a “great multitude” on Palm Sunday. We know from the historical record that the population of Jerusalem was about fifty thousand, but that during the festival of the Passover, the population could increase to as much as two hundred and fifty thousand. Besides, the ones who had either witnessed or were told of the raising of Lazarus, there were many people from Galilee who had heard or seen Christ and were anxious to see and praise Him. The city was crowded so that the word spread quickly. There must have been quite a tumult from the large crowd because when Christ was requested to quiet them. He replied, “if they keep quiet, the stones will cry out.” (Luke 19:40)

On Monday Jesus cleared the merchants from the temple. This made Jesus even more popular with the people, “all the people hung on His words.” The people knew that those, selling animals for sacrifice, were charging unfair prices and unfair exchange rates. There were “kick backs” to the high priests. The ruling religious establishment, along with the Pharisees were not popular among the Jews. According to Flavius Josephus, a secular Roman historian of the first century, Annas, a former high priest was the father-in-law of Caiaphas the present high priest so there was a great deal of nepotism among their ranks making them personally unpopular. “They sought to lay their hands on Him, but feared the multitude…. So they left Him and went away.”(Mark 12: 12)

On Tuesday and Wednesday, Jesus preached daily in the temple, “for all the people were very attentive to Him.”(Luke 19:48) Meanwhile the priests plotted to expose and embarrass Jesus by asking Him difficult questions. This similar tact is used in modern politics, when probing questions are asked of political candidates for the purpose of revealing weaknesses and embarrassing them. Christ was asked, “by what authority are You doing these things?”( Luke 20:2) And later He was asked, “Is it lawful for us to pay taxes to Caesar or not?”(Luke 20:22) Both of these were trick questions meant to embarrass Christ. Jesus answers these questions so perfectly, much to the chagrin of the priests, that His popularity among the people continues to increase. SO why the change of heart two days later?

Following the “Last Supper”, at about ten o’clock in the evening as was their custom, Jesus went out with His disciples to the Garden of Gethsemane to pray. At approximately eleven o’clock, a group of Roman soldiers, priests’ servants and Pharisees came and arrested Jesus and brought Him first to the priest Annas’ house and then to Joseph Caiaphas’, the ruling high priest at the time. At daybreak (Luke 22:66) Christ was brought before the Sanhedrin for questioning. We know that it was early in the morning because Peter heard the rooster crow when he denied knowing Christ. We also know that men huddled themselves around a fire because it was cold. (John 18:18) Early that same morning, Jesus was brought before Pontius Pilate, the Roman governor, who unlike the Sanhedrin, had authority to impose the death penalty. Pilate could not find any fault in Jesus and even tried to defend Him before His accusers. Three times Pilate attempted to release Jesus and three times the chief priest and the rulers incite the people to demand He be put to death.

Now the question has to be asked. How could the crowd be so supportive and praising of Christ during the week become so hostile as to demand His death the next day? The answer to this question is that it is not the same crowd! The multitude of people who supported Christ simply was not informed of Christ’s arrest and subsequent trial. There was no television news or early morning newspapers to announce the arrest. So, who was the hostile crowd present early that Friday morning?

The historian, Flavius Josephus*, tells us that the largest industry in Jerusalem was the running of the Jewish Temple. Josephus says that over ten thousand people were employed as guards, scribes, workers, etc. and they answered to the high priests. Therefore it would be an easy matter for the priests to assemble a large group under their control on short notice. The whole group was orchestrated; their jobs were at stake and certainly they would be willing to eliminate Jesus for their personal political and economical reasons. That is why they were able to cry out “in unison insisting, demanding with prevailing loud voices….Crucify Him!” That’s why they preferred that a murderer called Barabbas’ be released rather than Jesus. The crowd present was even willing to let “ His blood be on us and on our children.”(Matt 27: 16)

Historically, Jews are blamed for the crucifixion of Christ, giving rise to anti-Semitism. This is historically not accurate, because it is only the high priests and their followers who are guilty of Christ’s death and not the Jewish nation. Luke (23:27) describes a great multitude weeping as Jesus is carrying His cross on the way to Golgotha. The multitude obviously did not know about Christ’s arrest and trial until it was too late. From the scene of Peter’s denial it appeared that even the disciples were too afraid to raise the alarm.

Christianity sometimes lays the blame for Christ’s death on Pontius Pilate, (i.e. The Creed) because he did not have the courage of his convictions; yet, the Biblical record reveals that Pilate was supportive of Christ and found no fault in Him!

Cornellius Tacitus, another secular Roman historian of the first century A.D. gives insight to Pilate’s behaviour on Good Friday. There existed at that time a conflict between Pilate and Herod Antipas, ruler of Galilee and Perea. Herod lusted for Pilate’s position, dreaming of uniting his father’s (Herod the Great) kingdom of Judea, Samaria and Galilee under his own leadership and therefore he sought to undermine Pilate at every turn, sending in reports to the Roman Emperor Caesar, criticizing Pilate’s rule in Judea. Herod sent a letter to Caesar claiming Pilate had placed “Golden Roman Shields” that were offensive to the Jewish religious groups thus giving rise to hostility and possible revolution. Without conferring with Pilate, Caesar sent a very nasty letter to him about six months before Christ’s trial, admonishing him not to antagonize the Jewish religious rulers or face the consequence of losing his job! Although Pilate did not find Jesus guilty of any of the charges, (he also does not want the responsibility for killing a prophet popular with the people and besides, his wife warned him, “Have nothing to do with that just Man, for I have suffered many things in a dream because of Him.” (Matt. 27:19) Yet, he knew that if he went against the demands of the high priests and their followers, there would be letters and perhaps even delegations to Caesar, accusing Pilate of freeing a man who was plotting treason and causing upheaval among the Jewish people. The priests threatened Pilate that if he did not persecute Jesus, he was not a friend of Caesar’s, and that they have no king but Caesar, referring to Christ’s claim as king. Since Jesus claims to be the Son of God, the Jewish priests accuse Pilate of disrupting their monotheistic religion, having been cognizant of Caesar’s edict to Pilate not to mess with Jewish beliefs.

This also accounts why Pilate was so relieved when he discovered Christ was from Galilee and therefore he quickly dispatched Him to Herod, who was in Jerusalem at the time. Herod had murdered John the Baptist, and therefore should be able to deal with Jesus! Herod was curious because he had heard about Jesus’ preaching and miracles and was anxious to meet Him. When Jesus refused to perform any miracles or answer any of Herod’s questions, Herod sent Jesus back to Pilate who would then have the responsibility of deciding His fate.

In conclusion we see that external and secular accounts recording the history of the time substantiate and give insight to the events described in the Bible. The reference to the timing of the arrest and trial of Jesus, as well as the availability of a controlled mob by the priests, explains adequately why Christ was not supported at His trial by His followers. The record also explains why Pilate was motivated and pressured to do what he did, even against his own convictions. The bottom line, of course, is that it happened this way because God ordained it so—-when He gave His Only-begotten Son to endure crucifixion and death for the salvation of all who believe in Him.

* Flavius Josephus is a reference source given in the study notes of The Orthodox Study Bible, 2008, Page 1478.