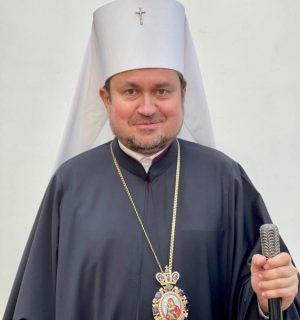 Archbishop of Winnipeg and the Central Eparchy, Metropolitan of Canada, Primate of the Ukrainian Orthodox Church of Canada, Locum Tenens of Edmonton and the Western Eparchy

His Grace, Bishop Ilarion of Edmonton and the Western Eparchy of the Ukrainian Orthodox Church of Canada (in the world Roman Rudnyk) was born February 14, 1972, in L’viv, Ukraine. There he received his primary and secondary school. After taking his entrance exams, he was admitted to the second year at the Ecclesiastical Seminary of Kyiv from which he graduated in 1992.

Upon the recommendation of Archbishop Vsevolod of Skopelos and with the blessing of the Ecumenical Patriarch, Bartholomew I, he was sent to Thessaloniki, Greece to further his education. He graduated from the Theological Faculty of the Aristotle University in 1997.

On December 5, 1997 he was tonsured a monk, taking the name of ‘Ilarion’. His Eminence Metropolitan Panteleimon of Tyroloe and Serention (Abbot of the Holy Monastery of Vlatadon in Thessaloniki) ordained Bishop Ilarion to the diaconate on December 21, 1997 and to the priesthood in 2000.

He continued his theological studies in Canon Law and completed his Masters Degree in Canon Law, successfully defending his paper on the ‘Canonical relations between the Metropolis of Kyiv and the Ecumenical Patriarchate until 1240’.

In 2001 he attended English language lessons at the University of Illinois in Chicago. In October of 2002 he was assigned to serve the newly created parish of Saint Panteleimon in Porto, Portugal.

Bishop Ilarion was enthroned on Sunday October 26, 2008 at the Ukrainian Orthodox Cathedral Of St. John in Edmonton, Alberta.