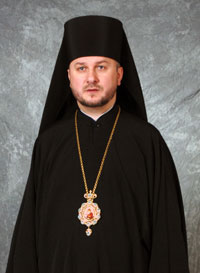 Acting-Bishop of the Eastern Eparchy

Bishop Andriy (Bohdan Peshko) was born on April 27, 1972 in Ukraine. In 1979 he entered Elementary School and received the Certificate of Secondary Education in 1989.

In 1989 he enrolled into the first year of St. Petersburg Theological Seminary, from which he graduated in 1993.

In 1994 -1995 he studied at Christ the Saviour Seminary (Carpatho-Russian Diocese of the Ecumenical Patriarchate) in Johnstown, Pennsylvania, USA under the omoforion of His Eminence Metropolitan Nicholas (Smishko) of Amissos.

On April 8, 2001 he was ordained a deacon by His Eminence Archbishop Vsevolod (Maidanksy) of Scopelos at St. Volodymyr’s Cathedral in Chicago.

On September 21, 2005 with the blessing of Archbishop Vsevolod he was tonsured a monk and given the name of Andriy (in honour of St. Andrew the First-Called) at St. Volodymyr Cathedral in Chicago.

On September 25, 2005 he was ordained to the rank of hieromonk and was promoted to a rank of ihumen by His Eminence Archbishop Vsevolod. On October 21, 2005 in the Holy Transfiguration of the Lord Cathedral in London (England) he was elevated to the rank of Archimandrite.

On November 22, 2005 His All Holiness Bartholomew I and the Holy and Sacred Synod of the Ecumenical Patriarchate unanimously elected him as the Bishop for the Ukrainian Orthodox Church of Europe and the Diaspora with the title ‘Bishop of Krateia’.

On August 20-24, 2008 at the Extra Ordinary Sobor of the Ukrainian Orthodox Church of Canada (UOCC), held in Saskatoon, Saskatchewan, he was chosen ‘Bishop-elect of Saskatoon, Vicar of the Central Eparch of the UOCC – Extraordinary Sobor, UOCC.

On February 1, 2011 he assumed the responsibilities of ‘Acting-Bishop of the Eastern Eparchy of the UOCC.