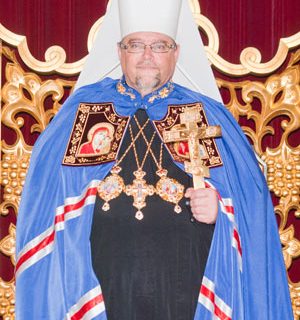 Archbishop of Winnipeg and the Central Eparchy, Metropolitan of Canada, Primate of the Ukrainian Orthodox Church of Canada, Locum Tenens of the Eastern Eparchy

His Eminence Metropolitan Yurij, the second of three sons, was born in Lachine, Quebec on May 26, 1951, to Petro and Anastazia Kalistchuk. He received his primary schooling in Lachine and Hamilton. He completed his secondary education in 1970 in Hamilton. In 1963 the Kalistchuk family moved to Hamilton, Ontario, where the family became members of St. Vladimir’s Sobor. The young Yurij attended Ukrainian School, was involved in Ukrainian Dance (Ensemble Zirka), the Cathedral Choir (which he later became choir conductor of in 1981-1982), and the Ukrainian Youth Organization (CYMK).

In 1985 he received his Bachelor of Theology (B.Th.) from St. Andrew’s College.

During 1983-87 he was Project Director of the Bortniansky Project and for part of this time President of the Ukraine Millennium Foundation which recorded the 35 Sacred Choral Concertos of Dmytro Bortniansky, Conductor ­ Maestro Volodymyr Kolesnyk.

On July 16th, 1988 he was ordained into the Holy Diaconate at St. Vladimir Sobor in Hamilton, Ontario by Metropolitan Wasyly. On the 17th of July, 1988 at St. Vladimir Sobor in Hamilton Metropolitan Wasyly ordained Deacon Yurij Kalistchuk into the Holy Priesthood. Father Yurij Kalistchuk’s first pastorate was at Holy Trinity Cathedral, Winnipeg, MB as Assistant Pastor, from September 1, 1988 to October of 1989.From September 1988 to December 1991 he was also the professor for Church Music at St. Andrew’s College.

In 1990, he represented Metropolitan Wasyly in Constantinople for the consummation of the Act of Eucharistic Unity. By decision of the Sobor of Bishops On December 15, 1991 Bishop Yurij was enthronized as ‘Acting Bishop of Toronto and the Eastern Diocese’. At the XIX Sobor of the UOCC in July of 1995, he was appointed ‘Bishop of Toronto and the Eastern Diocese’. From May of 1996 in addition to his Episcopal duties he was chosen as General Secretary of the Church Council of CKY (World Congress of Ukrainians).

In 1997 he was a member of the delegation from the Permanent Conference of Ukrainian Orthodox Bishops Beyond the Borders of Ukraine, at the Second World Forum of Ukrainians in Kyiv. In 2001, the Sobor of Bishops elevated him to the rank of Archbishop with the title ‘Archbishop of Toronto and the Eastern Eparchy’.

During 2002-2003 Archbishop Yurij served as one of the Vice-Presidents of the Canadian Council of Churches where he has been representing the UOCC since 1991.

On July 18, 2010 the Sobor (General Council) of the UOCC chose His Eminence to become the sixth metropolitan in the history of this church.

On August 30, 2010 the Holy and Sacred Synod of the Patriarchate of Constantinople ratified the Sobor’s decision and elected His Eminence to the Primatial Throne of the UOCC with the title “Archbishop of Winnipeg and the Central Eparchy, Metropolitan of Canada”.

The Enthronement of His Eminence took place on November 21, 2010 at the Ukrainian Orthodox Metropolitan Cathedral of the Holy Trinity in Winnipeg, Canada.