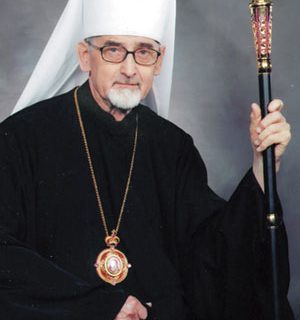 Metropolitan Emeritus of the Ukrainian Orthodox Church of Canada

His Eminence Metropolitan John, the youngest of twelve children was born to Nikolaj and Annie (Spizawka) Stinka on January 14, 1935 in Buchanan, Saskatchewan. He received his primary schooling in Dobranovetz, SK, and his secondary education in Yorkton, SK. After receiving his teaching certificate, he taught at the Hryhoriw Elementary School near Preeceville, SK. After this he worked for ten years in Saskatoon, SK. Here he was actively involved in the Ukrainian Orthodox community, where he sang in the Cathedral Choir and was a member of CYMK.

In the fall of 1969 he enrolled in theological studies at St. Andrew’s College in Winnipeg, which he successfully completed in 1972. Upon receiving his Licentiate in Theology, he continued his studies at the University of Manitoba. On August 18th, 1973 he was ordained into the Holy Diaconate at Holy Trinity Cathedral in Saskatoon by Archbishop Boris. On the 25th of August 1974 in the Ukrainian Orthodox Church of the Holy Transfiguration in Yorkton, Saskatchewan, Archbishop Boris ordained Deacon John Stinka into the Holy Priesthood. Father John Stinka’s first pastorate was the parish in Moose Jaw, SK, which he was assigned immediately after ordination. During his time in Moose Jaw, Father John continued with his studies and in 1976 convocated from the University of Saskatchewan with a Bachelor of Arts Degree.

In August of 1978 Fr. John was transferred to the parish in Kamsack, SK. Throughout his pastorship, Father John was actively involved in Ukrainian community life. For his pastoral work, the Ukrainian Orthodox Church in Canada (UOCC) bestowed upon him the honours—Nabedrenyk in 1977 and Scufia in 1980.

At the Extraordinary Sobor of the Ukrainian Orthodox Church of Canada, on November 27th, 1983 at the Holy Trinity Ukrainian Orthodox Cathedral in Winnipeg, Manitoba, Father John was consecrated as Bishop of Saskatoon and Vicar of the Central Diocese, His Beatitude Metropolitan Andrew, Archbishop Boris of Edmonton, and Archbishop Wasyly of Toronto fulfilled the act of consecration. In 1985 at the 17th Sobor of the UOCC, Bishop John was appointed as Bishop of Edmonton and the Western Diocese of the UOCC. In 1990 at the 18th Sobor of the UOCC Metropolitan Wasyly elevated him to the rank of Archbishop. On May 29th, 1993 the Sobor of Bishops granted Archbishop John the privilege of wearing a cross on his Klobuk.